On Tuesday, November 22nd, Courtney Dempsey from Good Day Sacramento, a popular morning show in the greater Sacramento area, brought the program's Designer Challenge to our own Beverly's Yards of Fabric Sacramento in Carmichael!
Two designers, Uniquka Johnson of UJ Fashions, and Latiya Abdullah of Tailand Designs, arrived bright and early along with the Channel 31 TV crew. They each received a mystery bag of fabric to work with and two hours to create an original garment.  Each designer was given a five minute shopping spree to gather notions and additional materials to use in their design. But of course, there was a twist! At the end of the five minutes, the designers received another mystery bag with instructions that the contents had to be included in their finished garment. Inside the bag? Burlap and a brightly colored feather boa!

Beverly's Yards of Fabric Sacramento provided all of the materials, workspace, sewing machines, ironing space and dress forms for the designers to use. Good Day Sacramento checked in three times during their show. The first segment followed the designers on their shopping spree, the second segment included designer interviews, and in the third segment the winner was chosen.

The judges of the Challenge were Beverly's own Bridget Young, and Lisa Kennedy Watrous, a Sacramento blogger from the site Closet Candy. Since the judges were split on their final decision, the news anchors back in the studio had the final vote. The winner? Uniquka from UJ Fashions and her adorable short dress. 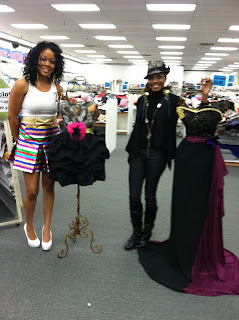 Everyone had a great time, and we hope to be a part of this great event again next year! Thanks Uniquka, Latiya, and Good Day Sacramento!